To the south and west of the town of Killarney is the world-famous Killarney National Park and Lakes of Killarney. The park totals 10,236 hectares - comprising the Upper, Middle & Lower Lakes surrounded by mountains and woodlands. The park is an area of outstanding beauty and includes the peaks of Mangerton - Torc - Shehy and to the west of the park are the MacGillycuddys Reeks - the highest mountain range in Ireland.

The nucleus of the National Park is the 4,000 hectare Bourn Vincent Memorial Park, formerly known as the Muckross Estate. Presented to the State in 1932 by Mr and Mrs W. B. Bourn and their son-in-law Senator Arthur Vincent it became Ireland's first National Park. In recent years, lands and waters of the former Kenmare Estate have been added, including Knockreer, Ross Island and Innisfallen.

In 1981, the park was designated by UNESCO as a Biosphere Reserve, part of a world network of natural areas which have conservation, research, education and training as primary objectives.

History: Human occupation of the Killarney area dates back at least to the early Bronze Age, when copper was first mined at Ross Island, almost 4,000 years ago. In early Christian times, monastic settlements provided the main evidence of the occupation of the area. The most important of these was the monastery on Innisfallen founded by St. Finian the Leper. The "Annals of Innisfallen", written there in the 11th-l3th centuries, are a major source of information on the early history of Ireland.

Muckross Abbey: Donal McCarthy Mor founded the Abbey, a Franciscan Friary, in 1448. These well-preserved ruins were the burial place of local Chieftains and, in the 17th & 18th centuries, of the Poets, O'Donoghue, O'Rathaille and O'Suillehhain. The Abbey provides the visitor with a wonderful experience - follow the old narrow stairways to get a feeling of how the old monks would leave their living quarters and make their way to prayer. 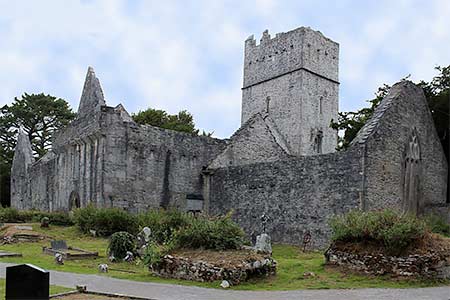 Following the Norman invasion of Ireland, the displaced Gaelic chieftains, McCarthy Mor and the O'Donoghue of Ross, held the lands around the Lakes. Later the lands came into the hands of the Herberts of Muckross and the Earls of Kenmare respectively. In 1911, the Muckross Estate was purchased by Mr W. B. Bourn as a wedding gift for his daughter, Maud, on her marriage to Arthur Vincent. 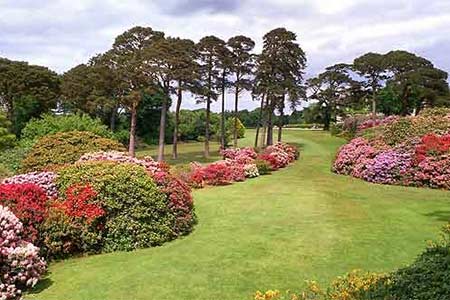 Muckross Gardens, are renowned for their fine collection of rhododendron species and hybrids and azaleas. There is an extensive water-garden and a rock-garden on a natural limestone outcrop. Many tender and exotic trees flourish in the mild climate and sheltered location around the large expanse of informal lawn and in the Arboretum.

Wildlife: A pedigree herd of Kerry cattle, once the dominant breed in Ireland, graze the demesne grasslands. Most of the other native mammals, as well as the long established introduced species, occur in the Park. Worthy of note is the Bank Vole, a species first identified in 1964 in north west Kerry. From there its range has expanded and now includes the National Park.

Deer: The only native herd of Red Deer remaining in the Ireland roam the upland areas of the Killarney National Park, especially on the slopes of Torc and Mangerton,. Now numbering over 850, this herd has had a continuous existence since the return of Red Deer into Ireland at the end of the last Ice Age, 10,000 years ago. Japanese Sika Deer, introduced! to Killarney in 1865, are found not only on the open mountain but also throughout the woodlands. 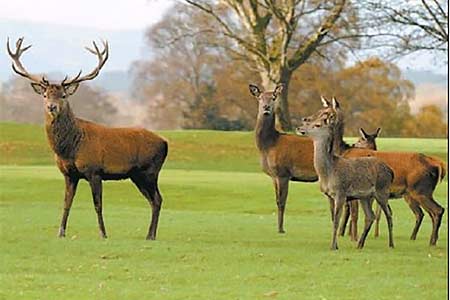 With the varied habitats of mountain moorland, woodland and lake, the Park is rich in bird species. On the .uplands, the most common birds are the Meadow Pipit, Stone chat and Raven. Peregrine Falcons and Merlins are occasionally seen as is the Red Grouse. The woodlands support characteristic bird communities with the Chaffinch and Robin as the most common breeders. The aquatic habitats are home for Heron, Mallard, Little Grebe and Water Rail which all breed around the Lakes while the Kingfisher and the Dipper are frequently seen on the rivers and streams. In both winter and summer native bird populations are augmented by migrant species. In winter for example, a small flock of around 40 Greenland White fronted Geese from the world population of around 12,000 feed in the Killarney Valley. Natural stocks of Brown Trout and Salmon inhabit the lakes and fishing for them is free, subject only to the usual Salmon licence regulations. The lakes also contain populations of Charr, usually a fish of Sub-Arctic lakes and of Killarney Shad, a small lake dwelling form of Twaite Shad.

Flora: Within the National Park are the most extensive areas of natural woodland remaining in the country. On the Old Red Sandstone of which the mountains are composed, are the native oak woods, dominated by the Sessile Oak with Holly and other evergreens as the under-storey. On the low-lying Carboniferous Limestone, swamp forest on the lake edges is dominated by Alder, while on the limestone reefs of the Muckross Peninsula is a unique Yew Wood. 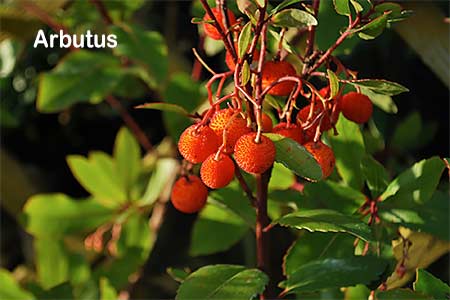 The mild oceanic climate permits a luxuriant growth of mosses and filmy ferns, many of them growing as epiphytes on the branches and trunks of the trees. In the uplands, the Park contains interesting areas of bog and moorland vegetation. Some of the characteristic plants of this region are those which are found otherwise only in Southern and South-Western Europe. Examples of these are the Greater Butterwort, St. Patrick's Cabbage and Arbutus.

Knockreer Estate: the closest part of the National Park to the town of Killarney, is the northern portion of the former demesne lands of the Earls of Kenmare. There are several pleasant walks through pasture and woodland and! along the shores of Lough Leane. Knockreer House, and its surrounding gardens command fine views of Lough Leane and the Mountains beyond. Visitor Facilities: The Killarney National Park Visitor Centre at Muckross House is the main Information Office and is open on a year round basis. It includes an audiovisual introduction to the Park and exhibition area. A Park Information Office is open during the Summer (July -September) at Torc Waterfall. Publications on sale at these offices include booklets for the self-guiding nature trails, an illustrated guide book and large scale Ordnance Survey map of the Park.

Jaunting Cars:- A traditional feature of Killarney, Jaunting cars are available for hire at locations adjoining the National Park. Most Jaunting car routes pass through the Park. Motor Cars:- Cars may enter Muckross Demesne by the Muckross House gate, 5km from Killarney, the opening hours of which are displayed at the gate.

Bicycles:- These can be hired in Killarney at O'Sullivan's Cycle Hire and are the most convenient form of transport particularly in the demesne areas of the Park.

Pedestrians:- The outlying areas are suitable for hill-walking but visitors are urged not to venture alone into remote areas. As well as Nature Trails, there are also many developed paths. The Kerry Way winds its way through the National Park on towards the Atlantic Ocean.